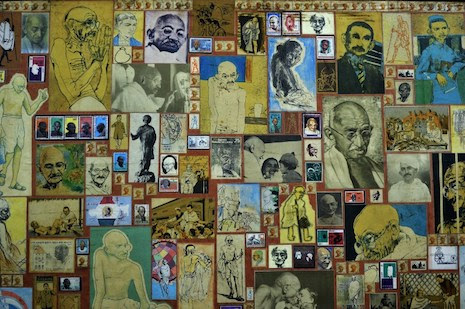 Various images of Mahatma Gandhi make up a hand-made collage featured in the reception area at the Gandhi Peace Foundation in New Delhi on Sept. 8. (Photo by Chandan Khanna/AFP)
As the world observes International Day of Nonviolence on Oct. 2, the birth anniversary of Mahatma Gandhi, it is simply unbelievable, but truly painful to see what is happening in India, where Gandhi championed the cause of nonviolence.
Just this week a Hindu mob lynched a Muslim man, following rumors he and his family ate beef in Bisara, a village just 40 kilometers outside New Delhi.
The murderous mob of some 1,000 people armed with swords and clubs dragged Mohammed Akhlaq and his family from their home and beat them with bricks and clubs on Sept. 28. He died the next day; his son remains in critical condition. His 82-year-old mother, wife and daughter were molested and beaten. The beef-eating rumor seemed to have originated from a nearby temple. That such an incident can take place in 21st century India should make any Indian hang one's head in shame.
If this was an isolated incident, we could attempt to brush it aside. However, we routinely hear of groups taking the law into their own hands and lynching people. Women paraded naked, people attacked, sexually violated, and sometimes killed as punishment for actions that some groups consider morally incorrect.
On March 5, another mob stormed a jail in the northeastern city of Dimapur, dragged a man accused of rape onto the streets, stripped him and lynched him. Vigilantes and moral policing seem to be the order of the day as right-wing forces in the country decide what one should eat and wear, what films one should see, what books should be read, above all whether it is "Indian culture" or not for a woman to be out late at night.
These radical forces have institutionalized violence in the country as never before. They have engaged in a multipronged program ranging from aggressive ghar wapsi [literally homecoming but which refers to religious conversions of Christians and Muslims to Hinduism] campaigns to the renaming of roads with Hindu names.
In their scheme of things, in order to establish a Hindu nation-state, they need to denigrate minorities, uphold the highly patriarchal and caste-based Manusmriti code [an ancient Indian legal compilation that divides society into four main groups based on four occupational groupings: Brahmin (priests), Kshatriya (warriors), Vaishya (traders) and Sudra (menial workers)], tamper with India's constitution and above all negate the ideals of a democratic India based on pluralism, justice, liberty and equality for all.
One of their key outfits — the "Sanathan Sanstha" — is held responsible for the murder of the communist politician Govind Pansare; they also are reported to be behind the murders of rationalists Narendra Dabholkar and M.M. Kalburgi.
Violence holds sway even as the country celebrates another birth anniversary of Mahatma Gandhi, the apostle of truth and nonviolence. Symbolically enough, in June 2007, the U.N. General Assembly through a resolution declared the day as International Day of Nonviolence, which is certainly an unparalleled tribute to the father of the Indian nation.
The resolution for this observance states: "the day is an occasion to disseminate the message of nonviolence, including through education and public awareness; it reaffirms the universal relevance of the principle of nonviolence and the desire to secure a culture of peace, tolerance, understanding and nonviolence." Mahatma Gandhi did his best to mainstream the doctrine of nonviolence. He was unequivocal about that.
Unfortunately, there are those from the political class, the corporate sector and others with vested interests who have completely disregarded what Gandhi epitomized, preached, lived and died for. Nonviolence is more of a utopia because we have not had the courage, the humility and the determination to mainstream it.
Tribal people across India are robbed of their water, forests and land with impunity. Faulty land and mining laws legitimize the way big players not only deplete precious natural resources but also destroy the identity and livelihoods of local tribal people.

Human trafficking and bonded labor has become an accepted practice in several parts of the country with thousands of children working in cotton fields, at brick kilns, in the stone-cutting industry and other forms of hard labor. There are an estimated 60 million children working in India's agricultural, industrial and commercial sectors according to a recent report released by the International Confederation of Free Trade Unions.
The high rate of female feticide, the way the girl child is treated and the inability of most men to treat women as equals is a powerful indicator of a violent society. Caste discrimination, honor killings, the inhuman practice of scavenging are all part of a canvas of institutionalized violence in India.
Early this week, a special court in Mumbai sentenced five people to death, holding them responsible for planting bombs on city trains, which resulted in a series of explosions killing 188 commuters and injuring many more on July 11, 2006. When Yakub Memon was hanged on July 30 for his involvement in the 1993 Bombay bombings a sense of violent perversity seemed to grip large sections of the country. India has increased its military budget by 11 percent and is today the world's biggest arms importer. All this is certainly symptomatic of a violent state.
If we are serious about nonviolence becoming a tangible reality, we must be able to mainstream it in every dimension of life: in our attitudes, articulation and action. Precious little seems to be done about this.
We would do well to pay heed to the words of Gandhi, who wrote in his Harijan journal on July 20, 1935: "Nonviolence is the greatest force at the disposal of mankind. It is mightier than the mightiest weapon of destruction devised by the ingenuity of man. Destruction is not the law of the humans. Man lives freely by his readiness to die, if need be, at the hands of his brother, never by killing him. Every murder or injury, no matter for what cause, committed or inflicted on another is a crime against humanity."
Jesuit Father Cedric Prakash is the director of Prashant (Tranqulity), the Ahmedabad-based Jesuit Center for Human Rights, Justice and Peace.