Christmas blessings of  PEACE,LOVE,JUSTICE,HOPE,GOODWILL and JOY be with you and your loved ones all through the NEW YEAR 2011!

The accompanying picture is rich with meaning:

The traditional nativity scene is ensconced on a PIPAL LEAF.This leaf and the tree on which it grows is sacred and special  to most  Indic religions and traditions;  impressions of it have also been found in the Indus Valley Civilization several centuries ago. It symbolises peace and enlightenment. Its medicinal properties are well-known. When  dried, the leaf  is transformed into a most intricate web-like design-radiating the wealth and beauty of nature.

Providing the backdrop is another exquisite piece: the stone trellis of a window from the Siddi Saiyyid Mosque in Ahmedabad. It symbolizes  the TREE OF LIFE - expressing how all of us are connected to one other. It was made almost five hundred years ago by a master craftsman. Today, as Ahmedabad celebrates 600 years of its existence, this masterpiece (a part of our heritage) could provide a meaningful lesson to all of us.

Please use this image widely --Send Cards/Telegrams/Greetings to Binayak for January 4, 2011 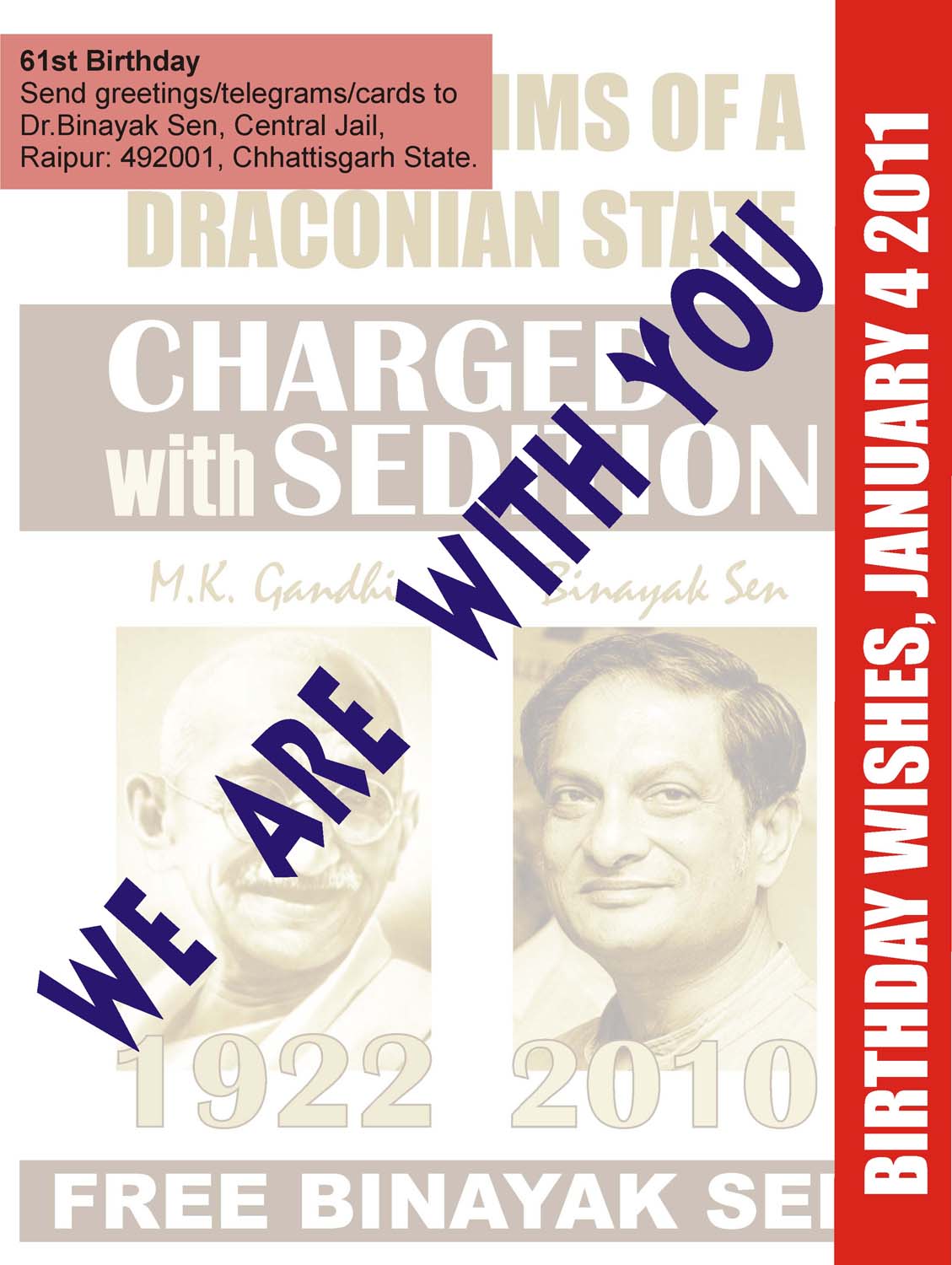 Created by Citizens for Justice and Peace (CJP), Mumbai

I have just returned after saying a final "goodbye" to you, Joe, and I have done so with an extremely heavy heart!

We were told over and over again during the ceremony that we need to remember you with joy and gratitude and without sadness!  That is easier said than done; because, as I encountered the women of Gulbai Tekra outside the Church with tears welled up in their eyes, it goes without saying that there are many, many here on this earth, who are going to miss you – very much!

My first 'real' encounter with you must have been in 1978 when we spent a month in Mt. Abu, in a programme, trying to understand the real meaning of people-centered development work.  You as a Professor of great repute from a well-known college, and me as a young "raw" scholastic.  We had one thing in common: both of us like several others, seemed to have been bonded by the faith-justice mandate that was given to us, by our recently concluded  32nd General Congregation.  You played a stellar role in the whole programme, literally dropping your guard and reaching out to all in a most humble manner.

It was simply amazing to see you take the part of a blind beggar and later that month  to see you dance away with Eddie Fonseca and me, to celebrate Fr. Espassa's Golden Jubilee.  No one expected the respected Professor Joe Braganza to be dancing a jig; but that was you Joe,... sheer vintage!

And then came those three memorable years when as a student of Theology, I was privileged to assist you in the Gulbai Tekra School.  It was here that I truly experienced the quintessential Joe - a person who oozed love and compassion without measure.  You gave of your all, without counting the cost.

The little children simply loved you; the youth would do anything for you; and the elders regarded you as one of their own.  Through your dogged determination you were able to throw open the doors of St. Xavier's College to the poor of the area. The Gulbai Tekra folk finally had something which they could call their own: a whole campus indeed!  There were many who were very amused when they used to ask the Gulbai Tekra children, where they study, to hear them say with puffed up pride,  "In St. Xavier's College!"  Yes Joe, in your own unassuming way, you gave them an identity and dignity!

That is why, I guess, that when I invited you to preach the homily at my first Mass, you emphasized the fact that a Priest must first be a true shepherd and a servant of the people.  In your own inimitable way, you personified that!

The last time I met you was on November 25th...as usual, your memory was as sharp as ever, as you asked me about my work and former colleagues.  You condoled with me on the death of my mother; and when I told you that she died at the age of 87, there was that mischievous grin on your face as you retorted, "Well, she was quite old then!"  Guess you knew that a fortnight later you would be joining her in the choir of saints!

There are hundreds of other thoughts that race through my mind at this moment.  I feel good that I have been able to put down at least a few of them, as a tribute to you, Joe!  You were a multi-faceted human being but at the core, you were a man with a very big heart: with a special place for the poor, the rejected and the unloved.

Thank you, Joe for all this and more!  Goodbye Joe!

(A personal tribute to Fr. Joe Braganza, a Jesuit of the Gujarat Province who died at the age of  90 years on December 11th, 2010. He was a founding member of St. Xavier's College, Ahmedabad, and a former Vice-Principal who later reached out to the slum-dwellers of Gulbai Tekra through a variety of initiatives.)

(* Fr. Cedric Prakash SJ is the Director of PRASHANT, the Ahmedabad based Jesuit Centre for Human Rights, Justice and Peace.)

On December 10th, 1948, the world opened a new chapter in its quest for justice, liberty, equality and fraternity as it gave itself the Universal Declaration of Human Rights. India is a signatory to this Declaration and the fact is that when we gave ourselves the Constitution on 26th November, 1949, the UDHR greatly helped in defining the rights of Indian citizens.

As we usher in another Human Rights Day, its time to take stock of what is happening in various parts of the country.  Human rights violations are on the increase instead of decreasing and this is the painful reality we need to come to grips with.  Thousands of tribals are still denied access to the forests, lands, and water which they once owned. Wanton industrialization through mega-projects has resulted in displacement of thousands and with great harm to the environment.  The dalits are still children of "a lesser God" in most parts of the country. Women and children, being the most vulnerable, are also easy targets to all types of violations.  Fundamentalist forces blatantly continue their attacks on the minorities all over.

To top it all, the consistent exposés of rampant corruption in society speaks volumes of the fact that as one small section stands to gain through illegal and unethical profiteering, there is another section who is at the receiving end and most often, it is the poor and marginalized.  The mining and the building lobbies are classical examples where "the bosses" are able to maximize their profits by exploiting others. They carry on with impunity and with apparent immunity.

What seems to becoming more and more accepted is the ability of powerful and vested interest to deny free speech, to silence and even to kill those who try to expose the rot in our system and to defend the rights of victims.

It is fitting therefore, that the theme for Human Rights Day this year is highlighting the role played by human rights defenders in protecting the rights of others and in order to end discrimination.

Human rights defenders speak out against abuse and violations including discrimination, exclusion, oppression and violence. They advocate justice and seek to protect the victims of human rights violations. They demand accountability for perpetrators and transparency in government action. In so doing, they are often putting at risk their own safety, and that of their families.

Here in Gujarat we see some who have relentlessly and conscientiously tried to bring justice for the victims of the Gujarat Carnage of 2002.  Unfortunately, they too end up on the receiving end as some victims and associates are either bought up or are compromised by the other side.  Even an appeal to the UN Commissioner for Human Rights invites contempt, scorn and ridicule; but the irony of it is that those who do the latter have absolutely no problem if multi-nationals are invited to loot the State, provide unjust wages and do not even meet established environmental safeguards. A feeling of embarrassment blinds one to a more serious reality.

It is therefore imperative that Human Rights Day 2010 highlights and promotes the achievements of human rights defenders and emphasize the primary role Governments must play in enabling and protecting their role. The Day is also intended to inspire a new generation of defenders to speak up and take action to end discrimination in all of its forms whenever and wherever it is manifested.

The story does not end after 10 December 2010. The focus on the work of human rights defenders will continue through all of 2011.

(*Fr. Cedric Prakash SJ is the Director of PRASHANT, the Ahmedabad based Jesuit Centre for Human Rights, Justice and Peace.)