MIGRANTS AND REFUGEES CHALLENGE US! by Fr. Cedric Prakash sj

January 17th is designated as the ‘World Day of Migrants and Refugees’.  The theme this year is ‘Migrants and refugees challenge us. The response of the Gospel of Mercy’.

Writing on the theme Pope Francis states, “In our time, migration is growing worldwide. Refugees and people fleeing from their homes challenge individuals and communities, and their traditional ways of life; at times they upset the cultural and social horizons which they encounter. Increasingly, the victims of violence and poverty, leaving their homelands, are exploited by human traffickers during their journey towards the dream of a better future. If they survive the abuses and hardships of the journey, they then have to face latent suspicions and fear. In the end, they frequently encounter a lack of clear and practical policies regulating the acceptance of migrants and providing for short or long term programmes of integration respectful of the rights and duties of all. Today, more than in the past, the Gospel of mercy troubles our consciences, prevents us from taking the suffering of others for granted, and points out way of responding which, grounded in the theological virtues of faith, hope and charity, find practical expression in works of spiritual and corporal mercy.”

In one stroke, we are challenged by the painful reality of the refugees of today and at the same time we are made to realise that we have but no choice but to do all we can to address one of the most serious problems of our world today.

When Angela Merkel the Chancellor of Germany threw open the doors of Germany (and also of Europe) to the refugees who were coming en masse to Germany, there was a natural wave of resentment from several of her country men and women and also from other parts of Europe. She did not relent; though in recent days there are reports that she is slowly giving in “to public pressure”. On the other hand, we have a man like US Presidential hopeful Donald Trump who over and over again states that Muslim refugees should not be allowed into United States. The irony is that his ratings go up in the United States which is sworn to principles of democracy, equality and dignity of all men and women. Fortunately, Pope Francis has become a beacon of hope not only for refugees but for all men and women; some months ago he strongly expressed his desire that every Catholic Parish of Europe adopt at least one refugee family. 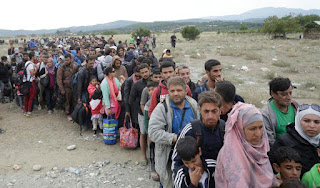 The refugee crisis today cannot be seen in isolation of powerful lobbies and other vested interests.  The arms and ammunition industry plays a crucial role and so do mercenaries of every hue.  There is very little political will in the world today to address the endemic causes of the refugee crisis; Pope Francis reminds us that these root causes include discrimination, racism, extreme nationalism and xenophobia.

It is important therefore that on a day dedicated to migrants and refugees, we commit ourselves whole-heartedly to address their plight and do all we can to ensure that our world becomes more humane, more just and more merciful for all – particularly to the migrants and refugees!
16th January, 2016
* (Fr. Cedric Prakash SJ is the Director of PRASHANT, the Ahmedabad-based Jesuit Centre for Human Rights, Justice and Peace.)
Address: ‘PRASHANT’, Hill Nagar, Near Saffron Hotel, Drive-in Road, Ahmedabad - 380052
Phone: (079) 27455913, 66522333 Fax:  (079) 27489018
Email: sjprashant@gmail.com       www.humanrightsindia.in

THE PULSE OF THE PEOPLE by Fr Cedric Prakash sj (in Smart COMPANION , January2013)

Pulses are staple food for the poor. They have
a right to get it at affordable price.

In 2013, the United Nations declared the year 2016 as ‘The International Year of Pulses’ (IYP 2016). When it did so, several eyebrows were raised. ‘Why is an international year dedicated to pulses when there are many other serious problems plaguing the world today?’ The answer is obvious. The unpretentious pulse has a lot to do with the poor. It is indeed a mandatory part of their daily diet and without at least a small intake a fairly large section of those who live below the poverty line will find it difficult even to survive.
In India, in the past year, pulses have been a bone of contention. In a lead article entitled ‘While dhal prices have doubled: here’s the math’ (TOI, October 17th 2015) the author writes, “Where does a 12% decline translate as 100% increase? In the bizarre world of India’s food math. Production of pulses slipped down by 12% in 2014-15 compared to the previous year. As a result, price of this essential item has zoomed up more than 100% across the country”. For the ordinary person, this sky-rocketing rise in prices, which the Government has been unable to control, has meant a severe blow. Some years ago, the rise in the cost of onions became a political weapon and even led to the fall of certain State Governments. The ordinary pulse is slowly becoming ‘the pulse of the people’ and has the potential of becoming yet another political weapon in India.
The question one needs to ask is “What are pulses and why are they important?” In an introduction to the IYP 2016, the United Nations says, “Pulses are annual leguminous crops yielding between one and 12 grains or seeds of variable size, shape and colour within a pod, used for both food and feed. Pulse crops such as lentils, beans, peas and chickpeas are a critical part of the general food basket. Pulses are a vital source of plant-based proteins and amino acids for people around the globe and should be eaten as part of a healthy diet to address obesity, as well as to prevent and help manage chronic diseases such as diabetes, coronary conditions and cancer; they are also an important source of plant-based protein for animals. In addition, pulses are leguminous plants that have nitrogen-fixing properties which can contribute to increasing soil fertility and have a positive impact on the environment.”
Pulses therefore:
• are nutrient dense, a good source of non-animal protein, and very high in fibre than any other vegetable
• use half the non-renewable energy inputs of other crops
• are a low carbon footprint food and improve the sustainability of cropping system
One also needs to visit the objectives of the International Year of Pulses which include:
• increase in pulse production by small land holders / women farmers to improve food security in high risk areas
• increase global awareness / interest of consumers, governments, food industry and NGOs in pulses and their health, nutrition and environmentally sustainable benefits
• develop an internationally coordinated health and nutrition research strategy through engagement with governments, researchers, NGOs, associations, etc
• improve the regulatory framework in which trade occurs to enhance food security and reduce price volatility
• improve production performance (yield, disease control, variety availability, etc) so that pulses can contribute to sustainable development of cropping systems around the world
There are several factors which are responsible for the rise of pulses in India today; these include:
• an increase in the demand for protein-enriched food
• the fact that several farmers are opting to cultivate and produce cash crops rather than pulses
• the Government has no effective price support mechanism for pulses
• there is an improper management and distribution of these essential commodities
• rampant corruption caused by hoarding by traders to increase their profits
• there is gross supply chain mismanagement
• and finally, the Government does not seem to have the political will to check the rising prices of pulses and ensure that at least the poor and the marginalised of the country have a basic nutrient in their daily diet
Given the growing global concern for the environment, pulses are generally regarded as environment-friendly food because they require minimal processing and no refrigeration which limits natural resource consumption in the later stages of the food supply chain. Pulses can be stored normally for several months and sometimes even for years without spoiling or losing its nutritional value. This can reduce the likelihood of consumer food waste due to spoilage and make pulses a really good choice for households which suffer from food insecurity. Above all, even when cooking pulses consume far less water than meat.
Many of the world’s poor have little or no choice with regard to food. Millions in India have to subsist on rice and/or rotis (chapattis), make do with a little dhal ensure that they are able to survive. When pulses go beyond the reach of these poor, we are not merely taking away what is rightfully theirs but in more ways than one hampering their growth and even perhaps survival. Having felt the pulse of the people, we need to realise that what is happening in our world today like the scarcity of pulses in India, is something to be deeply concerned about.
In ‘Laudato Si’ Pope Francis reminds us, “For poor countries, the priorities must be to eliminate extreme poverty and to promote the social development of their people. At the same time, they need to acknowledge the scandalous level of consumption in some privileged sectors of their population and to combat corruption more effectively” (#172); but, are we interested?
In this International Year of Pulses, the least that many of us can do is to ensure that the poor of our country have at least a cup full of pulse as their daily bread!
Cedric Prakash SJ
Director, PRASHANT
Ahmedabad
at 9:08 AM 35 comments: