60 years of Martyrdom of Vasant & Rajab 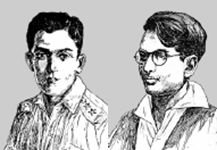 The 60 years of Martyrdom of Vasant & Rajab

The 60 years of Martyrdom of Vasant-Rajab will be completed on Saturday, 1st July 2006. These two youngsters had sacrificed their lives during the communal riots in Ahmedabad in 1946. To commemorate the 60th year of Martyrdom of Vasant - Rajab, various programmes will be organized in the State through the year by : Movement for Secular Deocracy, Akhil Bhartiya Sevadal, Gujarat Sarvoday Mandal, AWAG, PRASHANT, Janpath, Pragatisheel Lekhak Sangh, Cultural Educational Forum, Gandhi Peace Foundation and others.

A Seminar " Reimagining the City, Reimagining the Nation " will be organized by ANHAD at the CC Mehta Auditorium, MS University, Vadodara from 9.30 am. to 5.30 pm. Thereafter, “A cultural Tribute to Vasant-Rajab - An Evening of Dance, Poetry and Music” will be held from 7.30 pm. onwards. Dhruv Sangari, Gauhar Raza, Khalil Dhantejvi, Saba Azad Grewal and Mehneer Sudan will be the artistes performing at this cultural event.

On Saturday, 1st July 2006, a Vasant-Rajab Calendar will be released by Sevadal, in the presence of Shri Brahmakumar Bhatt and Shri Prakash N. Shah at Sardar Congress Bhavan, Bhadra, Ahmedabad, at 9.00 am. and then, a rally will be taken out to Vasant-Rajab Memorial Chowk, Khand-ni-Sheri, Jamalpur, to join the Tribute Programme.

Afternoon - Release of Book on Vasant-Rajab
On Saturday, 1st July 2006, evening, at 5.00 o'clock, a programme jointly organized by various organizations will be held in Upasana Khand, Gujarat Vidyapeeth. The programme will be presided over by the Gujarat Vidyapeeth KulNayak, Shri Sudarshan Iyengar. A book written by Shri Prakash N. Shah on Vasant-Rajab, depicting their lives and time, will be released. The first copy will be presented to families of Vasant and Rajab.

Songs and speeches paying rich tribute to Vasant-Rajab will be presented.

Mehmadabad :
On Saturday, 1st July 2006, the organizers of Vasant-Rajab Academy will meet and chalk out the year-long programmes at Mehmadabad, Kheda District.
Vadodara :
On Sunday, 2nd July, under the auspices of Movement for Secular Democracy, PUCL and others, a Memorial Meeting will be held in the evening at 5.00 o'clock at Bhailal Amin Hall in Vadodara. The Meeting will be presided by Shri Manubhai Patel - President, Akhil Hind Sevadal and Ex-Member of Parliament. Shri Prakash N. Shah, Editor "Nireekshak" will address the meeting.

Centenary Year :
In the coming months, various programmes will be organized in Surat and Bhavnagar.
This is the birth centenary year of Vasant Rao Hegishte, and to commemorate this occasion, various programmes will be organized in Ahmedabad.
Prof. Abid Shamsi is translating the Vasant-Rajab book into English. A Hindi translation will also be done.

Demand for Postage Stamp :
Apart from all these programmes, in a letter to the Central Ministry of Communication and Information Technology, Shri Dayanidhi Maran, the Movement for Secular Democracy has requested that a special postal stamp in memory of Vasant-Rajab be brought out. It has also requested the Gujarat State Education Department to include a chapter on Vasant-Rajab in the syllabus of the School Textbooks.

Essay Competition :
An Essay Competition on communal problems and national unity will be organized in a few days, for students and citizens and the best essays will be rewarded on 10th December 2006, International Human Rights Day.

PRASHANT, the Ahmedabad based Centre for Human Rights Justice and Peace has Bcalled for the immediate withdrawal of the Std. X Social Science Textbook recently published by the Gujarat State Board of School Textbooks and which is meant to be studied by the final year students from the academic year which has just begun.

In letters addressed to the Gujarat State Board of School Textbooks (to the Director and the Executive President), Fr. Cedric Prakash the Director of PRASHANT states that “anybody reading this Textbook will recoil in horror at the mistakes on almost every single page”. He asserted that since the Board might have to publish a whole new book entitled “ERRATA” the easier thing would be to withdraw the book immediately and unconditionally.

The Textbook is galore with mistakes, bad language, spelling and grammatical errors, factual inaccuracies and even statements that are highly manipulative.

The above (including the spelling mistakes and the wrong grammar) is just a sampling of the mistakes, inaccuracies, distortions which are in the Textbook of Std. X in almost every page.
For the State Textbook Board, merely to send a GR highlighting some mistakes is not sufficient. The book must immediately and unconditionally be withdrawn. In 2004, PRASHANT had highlighted several inaccuracies with regard to the Std. VIII Social Science Textbook. The Gujarat State Textbook Board paid no heed to that.
In 2005, after the publishing of the new Textbook for Std. IX, together with several concerned citizens of Gujarat, PRASHANT highlighted serious flaws in the book, very specially the importance given to a person like Hitler.
A Public Interest Litigation was filed in the Gujarat High Court but this was rejected by the learned Court, inspite of a massive campaign, saying that if we approached the Board, they would do the necessary changes, but till today, nothing has been done. The very books that had been published for Std. VIII and IX are back in the hands of the students all over the State of Gujarat.
Together with several other concerned citizens of Gujarat, drawn from all walks of life, PRASHANT calls upon the immediate and unconditional withdrawal of Social Science Textbooks of Stds. X, IX and VIII.
at 2:52 AM 1 comment: