THE GIRL CHILD AND THE GUJARAT MODEL -by Fr. Cedric Prakash sj 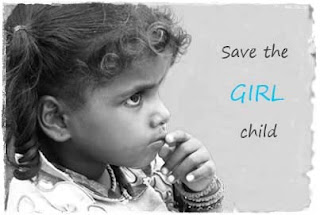 Some years ago several newspapers across the country highlighted a report brought out by the United Nations Department of Economic and Social Affairs (UN-DESA). The report contained data for 150 countries over forty years and had blatantly stated that “an Indian girl child aged 1 to 5 years is 75% more likely to die than an Indian boy, making this the worst gender differential in child mortality for any country in the world”.

The above mentioned report was released sometime in 2012. That very year, in the month of May, Aamir Khan in his popular serial on social issues “Satyamev Jayate” focussed on female foeticide – of how the female unborn child was killed all across India.  As part of this well-researched serial was the case study of Amisha Yagnik from Ahmedabad who had to undergo the nightmare of abortion after abortion when her husband and in-laws forcibly had her tested and did away with the foetus when it was found to be female.  Ultimately, she had to escape to her maternal home a few years ago to give birth to her only child Kamya who is today eleven years old.

Naturally, the story of Amisha created an uproar in the urban educated middle-class society of . Several TV channels also blacked out the serial in .  However, the story of Amisha is not an exception but the hard and stark reality of what is happening to the girl child in today. So when the Times of India (Ed. Ahmedabad) on July 25th, 2013 headlined ‘Guj cities killing infant girls!’ it was indeed not a shocker! That female foeticide is rampant all across and particularly in urban areas is without doubt.

is a highly patriarchal society and this is clearly reflected in the social ethic which governs the State; that a girl child is not wanted and women are not treated equally with men is just taken for granted. Women in as a whole are condemned to a life of drudgery and there is a very small percentage of women who are professionals or who hold executive positions in the corporate sector.

The Gujarat model of the girl child certainly does no credit to a Government which has been boasting of “development” all along. In India today, the child sex ratio for every 1000 boys is 914 girls; whereas in Gujarat it is just 890 girls to a 1000 boys with certain cities like Surat (831:1000) and Vadodara (865:1000) falling far below that mark.

An important intervention would be to educate all sections of society on the fundamental value of gender equality. Inspite of campaigns by the Government and the NGOs to save the girl child, precious little would happen if there is no attitudinal change across all sections of society. Even the textbooks which are promoted by the Government reek of a patriarchal mindset. Within the average family, more importance is given to the education of a boy rather than a girl. The tragedy is that several from across the board see no problem in this.

Today, during a visit to a school in the midst of the squalor and hostile environs of ‘Citizen Nagar’, several of the girls studying in the school were asked what they would like to be in life; pat came the responses: “Doctor”, “Teacher”, “Scientist”. If their dreams actually materialise, it would surely be great going - unfortunately the way things happen today is that most of them, if not all of them, would be married off at the age of 18 and even earlier.

The Catholic Church in India observes September 8th as the ‘Girl Child Day’, in keeping with the birthday of Mary, the Mother of Jesus. A month later, on October 11th the UN will celebrate the “International Day of the Girl Child”. One surely needs to celebrate the girl child on both these days; however; unless there is a sincere political resolve and an attitudinal change in all sections of society with the sheer determination to treat the girl child as equal to a boy child, we would surely have a long, long way to go before we actually see any dramatic change in the status in the girl child in Gujarat and in the rest of India.

(* Fr. Cedric Prakash SJ is the Director of PRASHANT, the Ahmedabad-based Jesuit Centre for Human Rights, Justice and Peace.)