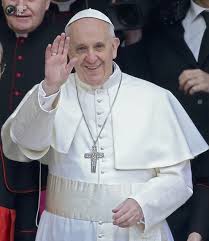 It was just a little after midnight of March 13th - 14th 2013. Like millions of others all over the world, I too was impatiently waiting for that white smoke which would emerge from the chimney of the Sistine Chapel in the Vatican heralding the news that a new Pope was elected. There were all kinds of rumours of the “going-ons” :who would be elected, what are the possibilities, how long it would take etc etc and suddenly the ticker on one of the news channel which I was searching on my computer, announced that the plume of white smoke had emerged. A Pope had been elected!

A Pope elected! But who was he? From where was he? Was he one of the ‘papabili’? There were hundreds of questions that crossed my mind as I desperately tried to look for the answer from one news site to another and suddenly the spokesperson from the Vatican arrived at the window telling us that name ‘Cardinal Jorge Mario Bergoglio’ from Argentina was elected as Pope and would take the name of ‘Francis’. Then ‘Bergoglio’ who? I had never heard of him? And why the name of Francis? Just as I was doing a ‘google search’ I got a call from a friend congratulating me for the first Jesuit Pope in history; my reply was “a Jesuit? It just cannot be!” I had taken for granted that a Jesuit cannot become a Pope. Well my ‘google search’, was still on and my friend was really right!

Bergoglio was indeed a Jesuit – a well-known one at that. In the meantime, I began receiving email messages, texts and calls from all over. I was too excited to speak that night. And then I was in for a shock. As millions of people both in the Vatican Square and across the world watched, Pope Francis wished all gathered a very simple ‘good evening’ and in a style that was soon going to be the hallmark of his papacy, he asked for the prayers of ‘all men and women of goodwill to help him lead the Catholic Church’.  This was something out of the ordinary.  No Pope had ever done that before! The revolution had begun!

A revolution indeed!  As I look back at this one eventful year for the Catholic Church and perhaps for the whole world, I try to place before me the challenges that Pope Francis has thrown not only to me but to all of us.  Personally, I am challenged in several ways.

·        Pope Francis challenges me to simplicity
Wow! This man has taken the name he chose “Francis” all too seriously! His gestures and actions have gone beyond the ‘cosmetic’ or ‘symbolic’ - All of us seem to be noticing everything: the fact that he has refused to stay in the Papal mansions; that his attire and even his shoes are not what the past Popes ordinarily wore; his sensitivity to make a phone call or to write a letter to the most ordinary person in a most unassuming way; the fact that he can allow a little child to slowly walk up to the stage and literally take his seat; the affection he exudes when he embraces a man with a disfigured face; his warm simple gestures all the time has indeed warmed the cockles of many a heart.  St. Francis of Assisi whose name he chose must surely be smiling from above, that the head of the Catholic Church today has the courage to take him and all that he stood for very, very seriously.

·        Pope Francis challenges me to be inclusive
And Pope Francis has done this in a most amazing way.  He has reached out to perhaps every group on Planet Earth very specially to the poor, to the marginalized, to the minorities. On July 8th, 2013, he visited the Sicilian island of Lampedusa (which is closer to North Africa than mainland Italy) which sees the influx of thousands of immigrants from Tunisia, Morocco, Libya, Egypt and other parts of North Africa as they seek a better future in Europe.  In his homily, he greeted those present saying, “I give a thought, too, to the dear Muslim immigrants that are beginning the fast of Ramadan, with best wishes for abundant spiritual fruits. The Church is near to you in the search for a more dignified life for yourselves and for your families”. A clear message to one and all that Christianity is about inclusiveness, about going to the margins and welcoming “the least of our sisters and brothers”.  The Holy Father then continued with a very powerful message to the whole world: “Today no one in the world feels responsible for this (the deaths of immigrants); we have lost the sense of fraternal responsibility; we have fallen into the hypocritical attitude of the priest and of the servant of the altar that Jesus speaks about in the parable of the Good Samaritan: we look upon the brother half-dead by the roadside, perhaps we think “poor guy,” and we continue on our way; it’s none of our business; and we feel fine with this. We feel at peace with this, we feel fine! The culture of well-being, that makes us think of ourselves, that makes us insensitive to the cries of others, that makes us live in soap bubbles, that are beautiful but are nothing, are illusions of futility, of the transient, that brings indifference to others, that brings even the globalization of indifference. In this world of globalization, we have fallen into a globalization of indifference. We are accustomed to the suffering of others, it doesn’t concern us, it’s none of our business.”

·        Pope Francis challenges me to live the Joy of the Gospel
On November 24th, at the conclusion of the year of the Faith, Pope Francis gave to the world his first Apostolic Exhortation entitled “Evangelii Gaudium” (the Joy of the Gospel). In this path-breaking document, he literally challenges the Christians to transcend their narrowness and self-centredness in order to truly understand the person and message of Jesus.  In no uncertain terms, he reminds all that “the Gospel tells us constantly to run the risk of a face-to-face encounter with others, with their physical presence which challenges us, with their pain and their pleas, with their joy which infects us in our close and continues interaction.  True faith in the incarnate Son of God is inseparable from self-giving, from membership in the community, from service, from reconciliation with others.  The Son of God, by becoming flesh, summoned us to the revolution of tenderness”.

·        Pope Francis challenges me to be more of a Jesuit
It still is such a dream that the Pope is a Jesuit - something perhaps unthinkable just over a year ago.  I joined the Jesuits in 1974 when General Congregation XXXII became a watershed for Jesuits the world over with the faith-justice mandate becoming the heart of the Jesuit way of proceeding.  In his one year as Pope, the world has not lost sight of the fact that Francis is a Jesuit to the very core.  His words, his actions, his attitudes are Jesuit through and through.  When he speaks about “conversion” he is obviously using the Spiritual Exercises of St. Ignatius of Loyola which has been so dear to him right from the time he joined the Society of Jesus. In his native Argentina, he always championed the cause of the poor.  Last December, he canonized Peter Favre, a close companion of St. Ignatius of Loyola whom he praised for being “in dialogue with all, even the most remote and even with his opponents.”  Pope Francis has constantly been searching for the magis in all things just as St. Ignatius wanted all Jesuits to be doing so.

Challenges indeed for me and for all and I am sure in the years ahead, we will have many more challenges -Happy New Year, dear Pope Francis!  Thank you for being my Pope, my brother and my Shepherd!