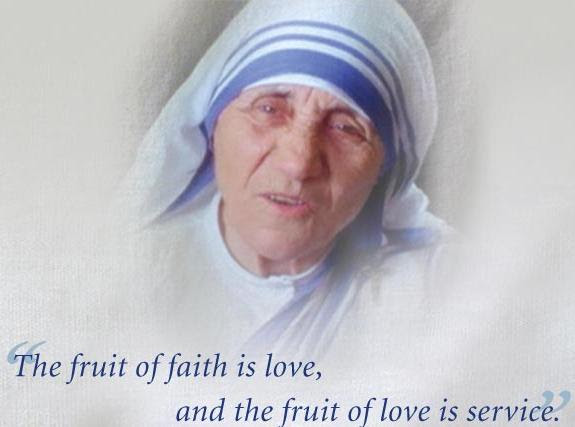 September 5th is the death anniversary and the Feast Day of Blessed Mother Teresa who died in 1997.

During her life-time Mother Teresa was universally regarded as the “Saint of the poorest of the poor” and she epitomized in a very special way the values of compassion, love, understanding and reaching out to those despised and marginalized by society.

It is also symbolic that she died on “Teachers Day”- because she was able to teach people,from all over the world, the values of which she was an embodiment.

On 19th October 2003, the late Pope John Paul II beatified Mother Teresa. This is a step before she is proclaimed a Saint.  Today, she is therefore known as Blessed Teresa of Kolkata. Her feast day is therefore celebrated by the Catholic Church on September, 5th every year.

On September 5th, 2005, in a major decision, the Ahmedabad Municipal Corporation, under the leadership of the then Mayor, (late) Hon. Aneesa Begum Mirza (may her Soul Rest in Peace), dedicated a garden with a bronze statue to the memory of this great person.   The dedication ceremony was performed  by His Holiness Maheshwardasji Maharajshri the Mahant of the Jagannath Temple, in the presence of several dignitaries of the city.

In Ahmedabad, her Sisters, the Missionaries of Charity, run two homes: in Shanti Nilaya (nr. Bhavsar Hostel), there are more than 200 male inmates picked up as dying and destitute from Ahmedabad. In Shishu Bhavan, (Nava Vadaj), the Sisters look after abandoned children and orphans meant for adoption in Gujarat.On August 26th(the birth anniversary of Mother Teresa) this year, an extension of the Shishu Bhavan was inaugurated

This year, we will once again gather together on Thursday, September 5th at 9.30 am to pay our homage to Mother Teresa, together with several other citizens of this city at the Mother Teresa Chowk

We invite you, your family, friends and colleagues,to join us for this Shraddhanjali.