“PEACE ON EARTH” AT FIFTY-ONE! 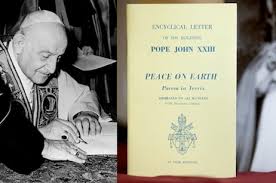 Exactly fifty-one years ago on April 11th 1963, beloved Pope John XXIII literally shook the foundations of this earth through his Encyclical ‘Pacem in Terris’ (Peace on Earth). This was his last Encyclical that he gave to the Church and the very first one by any Pope to be addressed “to all men of goodwill”.  The Encyclical was written in the midst of the turbulence and conflict which has seized several parts of the world: the Cold War, the erection of the Berlin Wall, and the Cuban Missile Crisis.

The Encyclical is divided in four broad sections:

Finally, Pope John XXIII reminds all men and women of goodwill (and particularly the Catholics) to be more engaged in social and political life in order that we have a more just and peaceful world.

India today is in the midst of her General Elections - regarded as the biggest democratic exercise on earth.  Pacem in Terris therefore serves as a great reminder of what values Indians should be looking for when they cast their vote for a particular candidate or party. Exactly a year ago, on the occasion of the Golden Jubilee of this great Encyclical, Pope Francis said, “‘Peace on Earth’ remains extremely contemporary and can act as a guide to peace-building in today’s world”.

There is so much in this Encyclical which finds a resonance in the Indian Constitution.  Justice, Liberty, Equality and Fraternity are the core values in the Preamble of our Constitution. Our country has for her motto ‘Satyamev Jayate’ (Truth alone triumphs).  Charity is the core teaching of Jesus and his Gospel; for us Indians, it is meant to be a non-negotiable.

What the run-up to the elections has unfolded is the fact that for several Indians, these values can be conveniently put aside and be replaced with untruth, injustice, hatred and divisiveness.  All caution has been thrown to the wind for some political parties and there is a blatant attempt to destroy the fundamental rights of several groups particularly of the minorities and the marginalized. One manifesto proudly steers on the path of greater nuclearisation which is certainly not going to help in the building of a more peaceful world!

Pacem in Terris serves as a reminder and a challenge: not only to Christians but to all men and women of goodwill. John XXIII while affirming that all humans are equal in dignity and are endowed with rights, also calls upon everyone, very specially those in governance to ensure that what is foundational for peace, is never destroyed.

On April 27th, the Catholic Church will canonize John XXIII acknowledging him as a Saint.  His contribution to us in India, this election season, is to have the courage to be communicators of justice, truth, charity and freedom. Do we have the guts to respond concretely?