PARTICIPATE in the HUMAN RIGHTS DAY PROGRAMME in AHMEDABAD!!!

PARTICIPATE in the HUMAN RIGHTS DAY PROGRAMME in AHMEDABAD!!!
Dear Friends .
Greetings!
Under the aegis of the Movement for Secular Democracy (MSD) -a  programme on December 10th- Human Rights Day -is once again  being organised!
from 230 pm to 530 pm(ending with a candle light demonstration)
at the Sardar Baug footpath, in front of Roopalee Cinema ,
Lal Darwaja, Ahmedabad

Gujarat continues to witness growing human rights violations-in every possible sphere; the poor, the marginalised, the dalits, the adivasis, the minorities, women and children -are generally the victims!
We request you to participate this event and encourage others to do so
We thank you in anticipation for the same.
Kindly excuse  cross-posting.Thanks
yours sincerely,
Fr Prakash 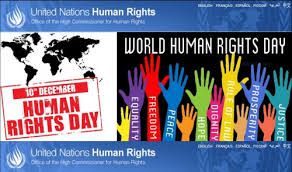 THERE IS NO ‘KING’ AND NO ‘SUBJECTS’ – ALL ARE CITIZENS – EQUAL RIGHTS FOR ALL!


All human beings are born free. They are equal in self respect and rights. They are rational and sensitive. They should behave with one another in a brotherly manner.

On December 10th 1948, the General Body of the United Nations accepted the Universal Declaration of Human Rights. Since then, 10th December is observed as the Human Rights Day all over the world.   Acceptance of this declaration was a proof of the common man’s agonies during the Second World War, his opposition to war and terrorism and his faith and belief in a more meaningful life. The Movement for Secular Democracy has been observing the Human Rights Day in the State since 1998.


In this declaration, thirty Articles have been incorporated along with the prologue. These Articles acknowledge human rights of common people all over, however, the situation of human rights is today very serious in the world, in our country and in our State of Gujarat.  Instead of appreciating the values of democracy and human rights, ‘might is right’ prevails all over. Those who are mighty and are invested with power, exhibit unlimited high-handedness with plenty of lies! The powerful trample upon those who are poor, depressed and deprived and add to their sufferings, pain and agony! The rights of those are made subjects of ridicule.

·         Give equal economic rights to all
·         Stop making changes in the Centre’s Land Acquisition Act
·         Stop making changes in the Centre’s Labour Laws
·         Stop making changes in Centre’s Right to Information (RTI)
·         Remove immediately the difficulties faced by the ‘bar-coded ration card-holders in the State
·         Stop advertisments which portray women as low and obscene
·         Prevent cruelty and rapes of women and provide them with protection and security
·         Implement strictly the Domestic Violence Law (2005)
·         Let the State Government enhance the grants given for multipurpose activity centres of women’s organisations
·         Prevent the privatisation and commercialisation of education in the State and implement the Right to Education (RTE)
·         Provide basic facilities in the residential areas of the minorities
·         Cancel the semester system which is burdensome to the parents, guardians, teachers and students
·         Protest against the removal of ‘Nirbhaya Fund’ and as well as the ‘Nirbhaya Diwas’ and ensure immediate implementation of the law against the Sexual Harassment (2013)
·         In order to prevent the ever-increasing sexual violence on children, effectively implement POSCO (the Protection of Children from Sexual Offences Act 2012)
·         Implement the recommendations of the Justice Verma Committee
·         Provide alternative residences to the slum-dwellers or regularise the same
·         Implement effectively the National Food Security Act (2013)
·         In the ‘Swach Bharat Mission’ (Clean India Mission) include 75 areas of the country that are highly polluted industrially
·         There should be no rethinking on the six environmental laws of the country and implement the original laws forcefully and immediately
·         Immediately pay the compensation to silicosis victims as per law
-          and  several others