TWELVE YEARS NOW: THE WAIT FOR TRUTH AND JUSTICE! 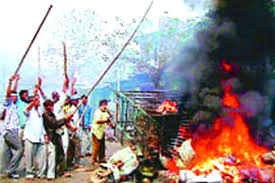 It is Sunday, 23rd February 2014:  the UN Special Rapporteur of Freedom of Religion or Belief Prof. Dr. Heiner Bielefeldt was visiting Ahmedabad listening to eye witness accounts from the victim-survivors and others on the reality of Gujarat.

Ms. Rupa Mody came up to the podium. She began in her usual calm, composed manner. She would have perhaps narrated the heart-rending story of her great personal tragedy a million times over. In a matter of minutes, however, she could hardly continue. She broke down and sobbed inconsolably asking this one question: “will my Azhu ever come back?”   Rupa, we all know is a Parsi and on that fateful day of February 28th 2002, when all hell broke loose, she was there in Gulberg Society with her two little children – Azhar and Binaifer.

She shared with the Rapporteur how several persons in authority were contacted by Mr. Ehsan Jafri (a former Member of Parliament), seeking security for the members of the housing society where they lived when the mobs had gathered outside to attack them. But no help came.  The mobs broke in and ruthlessly attacked the people, raped the women and burnt them, leaving 69 dead in one of the most horrific attacks during the Gujarat Carnage of 2002.

What happened the previous day, February 27th 2002, when 58 passengers traveling by the S-6 coach in the Sabarmati Express lost their lives (near Godhra) was a tragedy beyond comprehension! For next 24 hours, nothing happened anywhere! But early noon, on February 28th, after Maha-aartis in several parts of Ahmedabad city and other parts of Gujarat, all hell broke loose!

Mobs belonging to the Sangh Parivar, with complete connivance of the Gujarat Government, raped and brutalized, plundered and pillaged, burnt and killed at will! Even as she breaks down, Rupa asked this one question: “what did I do to deserve this?” Apart from being attacked herself, till today, she does not know what has happened to her only son: Azhar. Rupa’s traumatic story of a mother longing for her son to return is just one story of hundreds of victim-survivors of the Gujarat Carnage, who still relentlessly struggle for truth and for justice.

It is true that there have been some convictions – some powerful people like Maya Kodnani and Babu Bajrangi have been found guilty and have been given some exemplary punishment.  But, everybody knows that these convictions are just the tip of the iceberg and quite often the small fry are sacrificed to save the big fish.

Top of the list is Narendra Modi, the Chief Minister of Gujarat who presided over the carnage and who has not shown the slightest bit of remorse or taken responsibility of what took place.   There is an overdrive by his PR machinery to show that he has got a “clean chit” from the courts. It is extremely strange that a report of the Special Investigation Team (SIT) headed by R.K. Raghavan is regarded as the ‘final’ say whereas another report by Raju Ramachandran, the amicus curiae suggesting several lapses and loopholes in the SIT report is ignored by many.

An important new book by Manoj Mitta entitled ‘The Fiction of Fact-Finding: Modi & Godhra’ clearly lays bare the many contradictions in the SIT report and forcefully argues that “crucial evidence has fallen through the cracks”. In his interview to the Outlook magazine (17th February, 2014), the introduction states, “Indeed as he (Mitta) forcefully argues, the anomalies of the SIT’s closure report point to far more than the relativism of the truth; they mock India’s commitment to its national motto: Satyameva Jayate (truth alone triumphs)”.

Yes, today marks twelve years since that terrible tragedy unfolded in Gujarat on a hapless minority community. Some would like the victim-survivors to forget things; to bring to closure that terrible chapter; some even think of making the man who presided over this violence the next Prime Minister of the country! But for a person like Rupa, whose tragedy has been immortalized in the film “Parzania”, there will never be any closure. She waits…. she waits….. she waits…. for her Azhu to return home.

Will Rupa experience the triumph of truth and justice?

(*Fr. Cedric Prakash SJ is the Director of PRASHANT, the Ahmedabad-based Jesuit Centre for Human Rights, Justice and Peace.)