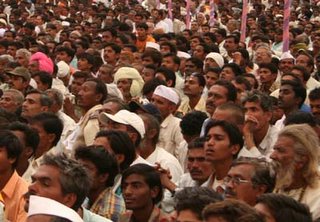 
The fascist and fundamentalist forces of the Hindutva Brigade were at their venomous best again ! For three days (from February 11 th to 13 th 2006), they spewed vitriol and hate against Christian Missionaries and their activities. From Narendra Modi to Morari Bapu to Togadia to lesser known icons of Hindutva, they tried to outdo each other in Christian bashing. In doing so, they proved just one point and their lie was nailed….that the Shabri Kumbh Mela that was held in Subir in the Dangs District of Gujarat had nothing to do with Hinduism, in the right sense of the word, but everything to do about creating communal discord. It had nothing to do with religion, but everything to do about politics.

The people did come in droves. Huge numbers brought in by trucks and buses from the BJP-ruled states of Rajasthan, Madhya Pradesh, Jharkhand and Chattisgarh. When journalists spoke to some of the so called “pilgrims”, many of them had no idea why they had come; in fact, most of them said that they were enjoying a good picnic ! After all, it was the largesse of their respective Governments that provided them with everything from travel to food. The host, the Government of Gujarat spared no efforts in their year dedicated to the “Year of Tourism”. The mantra was clear….”if foreigners do not want to come to Gujarat, let’s import people, by hook or by crook from those States ruled by us !”. For good measure, the Shabri Kumbh did have some representatives from the World Council of Ethnic Religions, but this strategy too, misfired, when one of the delegates who began his speech with “Allah-hu-Akbar” was shouted down and one of the organizers insisted that he say “Jai Sri Ram”.

The opening salvo was fired by none other than Narendra Modi, the Chief Minister of Gujarat, who is doing everything in his power to make Gujarat a “Hindu” State. In a fiery outburst in his acerbic tongue, Modi lashed out against the Missionaries, warning them of severe repercussions if conversions continued. “It is my Constitutional duty to prevent conversions” he thundered, conveniently forgetting that he had abdicated his Constitutional responsibility when in 2002 hundreds of Muslims were slaughtered in the towns and villages of Gujarat; and that even today, in the State he administers, the minorities, dalits, adivasis and women are at the receiving end. His viciousness was easily lapped up by the vernacular media and one of them, the Sandesh, screamed banner headlines in its edition of Sunday 12th February, that the Shabri Kumbh will bring an end to conversions to Christianity. Not to be outdone by Modi, Morari Bapu, the Hindu Kathakar of Gujarat, used the Bible and the Vatican in his tirade against the Christians. He even quoted “Scripture” saying that “according to the Gospel of St. Luke, Christ forbade conversions and that “it is hypocrisy not to follow what you preach !”. A classic example of how Scripture can be turned and twisted to suit ones ideology. Morari Bapu continued saying that “if the Vatican can send plane-loads to convert India , we definitely have to respond fittingly”. Togadia went a step further and warned the Christians that if they did not give up converting, they would go and do a Bharatiyakaran of the Vatican City .

Togadia, the International General Secretary of the Vishwa Hindu Parishad, was predictable in his style, lashing out at Christians and other minorities, but then, in his scheme of things, he also felt that the Hindus and the Christians had to get together to counter Jehad and the likes of Osama Bin Laden. However, he went on to say, that before this grand alliance can materialize, the Vatican has to give up conversions in India , if not, the Vatican itself will be Hinduized.

The RSS Supremo, K. S. Sudarshan, boldly announced a new strategy to ensue that India dominated the world by the year 2011. The strategy named Bharitiyakaran, is to Indianize the seventeen crore Muslims and the three crore Christians who live in India . His message was amply clear “ since we cannot throw the Muslims and Christians into the sea, we have to “Indianize” them “. However, when asked by the media Sudarshan was unable to define what “being Indian” meant and whether to be Indian was also to be Hindu and if one has to be Hindu, to which rung of the caste hierarchy one necessarily need belong.

The Shabri Kumbh Mela was significant in the way the protagonists of the Sangh Parivar did their best to woo the tribals. They spelt out one issue loud and clear…..that the tribals would only be called vanvasis (forest dwellers) and not adivasis (original inhabitants of the land). Very cleverly, Sudarshan asserted “for vanvasis, we have to tell them that they are part of the extended Hindu family”.

In their overzealousness to present Hinduism to the adivasis, sadhu after sadhu criticized the caste-system and felt that it was a deviation that needed to be amended. They also made efforts to say that the status of women has to change in Hinduism because after all, in most tribal societies, there is a greater gender-equity. In unfolding the strategy for Bharatiyakaran Sudarshan also exhorted the sadhus and the cadres of the Sangh “to work quietly, to communicate with the poor and the tribals in their tongue, live with them and help them with health and food !”.

The three day mela also passed several resolutions, one of them is that the Centre should enact a law to prevent conversions specially in the tribals areas. It is ironical though, that on March 26th 2003, the Government of Gujarat unanimously passed the “Gujarat Freedom of Religion Act 2003”. However, almost three years down the road, the Government of Gujarat has not been able to frame the rules which are mandatory to guide the implementation of this draconian Act. On Christmas Day 2005, when the Home Minister was confronted on a public debate on TV, he was unable to offer an explanation as to why these rules were not yet framed. However, this terrible law is allowed to exist like a Damocles sword, misused by lower officials, yet without the possibility of it being challenged legally.

The Shabri Kumbh Mela is now over. The Chief Minister of Gujarat Narendra Modi profusely thanked the NGOs and Human Rights Activists for giving it the media coverage which it might not have otherwise got. The bare truth is, were it not for the NGOs, Human Rights Activists, and a whole movement of civil society, who challenged the sinister game-plan of this mela, the end result would definitely have been far more dangerous to Indian society.

The Shabri Kumbh Mela was not a debate on Christians or on conversions; neither was it a debate on Indian religions or secular forces. It was a defining moment for Indian society at large and whether fascist and fundamentalist forces would actually triumph. It was true that they managed to bring in their much flaunted numbers but as some tribals mentioned, “we just came here to have a good time !” It is true that they spewed venom and hate against Christianity but in doing so, they have only exposed their narrow, petty orientations. It is true they have decided to chalk out a strategy for change; hopefully, they will begin with themselves.

The three day programme has also thrown up several questions for which the likes of Modi and his cronies have to be held accountable. Among them are :

§ can and should Governments indulge in such wasteful expenditure in the name of religion, when millions of adivasis do not have access to the basic amenities of life ?

§ what provisions are there in the law to reign in those who continue to make inflammatory speeches, very specially directed against minorities and other vulnerable groups ?

In the run up to the Shabri Kumbh Mela, the organizers were caught on the back foot when confronted and went overboard in saying that the Shabri Kumbh Mela had nothing to do with Christianity or about re-conversions. The irony of it was that they seem to have had no other point on the agenda except Christianity and conversions. A huge banner summed up their agenda when it loudly proclaimed “Asia Khand mein Isai karan ko koi sthan nahi hai. Hindu dharm ke virodh mein jo koi karyarath hoinge ve sabh nasht hoinge (there is no place in the Asian Continent for Christianization. Whoever is involved in opposing the Hindu religion will be destroyed).