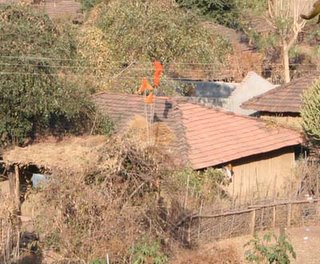 The widely circulated daily newspaper from Gujarat “ Sandesh” screened banner headlines on Sunday 5th February, “Missionario Samay Murari Bapuno Dhrujaro”(Murari Bapu attacks missionaries).The full length article contains all kinds of expletives and allegations against the Christians …It is the same Murari Bapu (a well known Hindu preacher with the mass following in Gujarat), who more than one and a half years ago, had suggested that Subir the tiny village in a remote area of the Dangs district should be the venue of a Shabri Kumbh.

That Murari Bapu makes such statements against the Christians is not totally unexpected from someone who has also become the poster boy of Hindu fundamentalists and fascist forces. Murari Bapu is just one of the star attractions at the Shabri Kumbh which will take place in the Dangs district from February 11 – 13, 2006; the others who are lined up are the whole range of the Hindutva shouting brigade: all shades of politicians, “sants” and others. Their website still loudly proclaims that more than five lakhs are going to gather for this Kumbh Mela. How many will ultimately turn up is any one’s guess. The crude fact is that even if just fifty percent of their estimated numbers come in, it will still overwhelm the tiny population of one lakh eighty thousand (the vast majority being tribals)who inhabit the Dangs.

The Dangs is a protected forest area; its beautiful sylvan surroundings with vast tracts of virgin forests, easily make it the envy of many other hill stations. However, the massive preparations for this Shabri Kumbh has resulted in the destruction of thousands of trees and made way to “development” (in terms of townships and roads) thanks to the massive amounts of funds being poured in by the Government of Gujarat. For an ordinary tribal who has no access to clean drinking water, primary health care or quality primary education, this massive showcasing of “material development” has left him dumb founded. Whilst some naturally see this as “progress” the vast majority really do not know how to react to this situation.

For the less than ten percent, who are Christians (some of them have been Christians for several generations) the onslaught which has already taken place by this Kumbh Mela is both intimidating and frightening. For several months now, sadhus in the guise of mendicants have been doing the rounds in their villages terrorizing them to give up Christianity and to participate whole heartedly in the Kumbh mela. What will actually happen during the days of the Kumbh is left to be seen. The “partakes” (pamphlets) distributed by fundamentalists organizations are obviously to raise the bogey of conversions and desperately calls for a “Ghar vapasi” (return to Hinduism) during the Shabri Kumbh. Last week, the Gujarat Government “told” the organizers that they should not have the reconversion programme as part of the kumbh meal’s farcical order in a drama in which they are totally involved!

At this juncture, the Gujarat Government is on the receiving end with notices to it from the Supreme Court, the National Human Rights Commission and several human rights organizations and individuals from all over. However, whilst all are assured that there will be absolutely “no problem” during the days of the Kumbh Mela ( actually everyone is clear that in the preparations and during the days of the Shabri Kumbh, there will be no physical attacks on Christians & Christian institutions.) the bare truth, however, is that the damage is already done. The vicious hate propaganda unleashed by communal forces with direct connivance with the Gujarat Government has helped the ugly head of communalism to bear its fangs in Gujarat once again.

Some days ago a Special Secretary from the Home Ministry of the Central Government, Mr. A.K.Mitra was sent to the Dangs to investigate matters. It is significant that the Catholic Church which has five well established and recognized institutions there, were not sent a letter of invitation to interact with Mr. Mitra. A telephonic call from the P.A to the Collector at the nth hour to the Religious Sisters, who run the Deep Darshan School, Ahwa, ensured some cosmetic presence. However the fundamentalist forces had their full complement of people including some “local Christians” who were all praise for the Kumbh mela and for the district administration! So much for people getting converted!

On Sunday Feb 5th, the Home Minister of Gujarat. Mr. Amit Shah had a round of meetings in the Dangs with regard to the preparations for the Kumbh mela. Very obviously, his assurances to the Christian delegations was that nothing will happen during the days of the mela, that police will be posted everywhere and that everyone’s cooperation is needed for the success of the Kumbh.

But the Home Minister of Gujarat is unable to answer are the following questions:

• Why are those who are indulging in hate propaganda against the Christians not being prosecuted?

• Why are the rules to govern the Freedom of Religion Act (2003) of the Gujarat Government not being framed? (It was enacted to prevent “forced conversions”)

• Why is the Gujarat Government patronizing the Shabri Kumbh and indulging in massive spending to create all kinds of infrastructure?

• What is being done to preserve the traditions, cultures of the the Adivasis of the Dangs, - in fact, their identity?

•How is the ecological destruction and the environmental degradation that is taking place in the Dangs being addressed?

The Gujarat Government is unable to answer any of these questions: the Kumbh mela will go on as planned with all the fanfare and the necessary rhetoric which has been so much part of the Modi Government… this time against the Christian minority !. The Central Government should act expeditiously and decisively. Until then it is ground zero, not merely for the adivasis of the Dangs but for the people of India…!