POPE FRANCIS ON THE CARE FOR OUR COMMON HOME -Fr. Cedric Prakash sj* 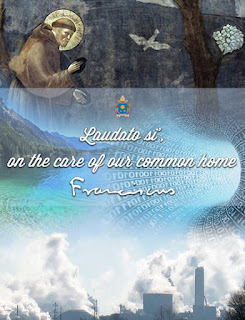 POPE FRANCIS ON THE CARE FOR OUR COMMON HOME
-Fr. Cedric Prakash sj*

The long awaited encyclical on ‘environmental issues’ by Pope Francis is finally here! Released this afternoon in the Vatican, the encyclical is certainly not merely a defining moment for the Catholic Church but in fact for the whole of humanity.

Entitled ‘Laudato Si’ (Praised be to you!) – ‘on care for our common home’, the first two words of a thirteenth century prayer written by St. Francis of Assisi and called the ‘Canticle of the Creatures’ or the ‘Canticle of the Sun’. The words ‘Praised be to you’ refers several times in this beautiful prayer which praises and thanks God for giving us the whole of creation and particularly for ‘Brother Fire’ and ‘Sister Water’. Pope Francis already set the tone of his papacy when on March 13th 2013, the day he was elected Pope, he took his name from St. Francis of Assisi who is universally regarded as the Patron Saint of the environment and in his identification with poverty and with peace.

‘Laudato Si’ has come in when the world is surely in need of a roadmap. That is why perhaps right from the moment Pope Francis contemplated this encyclical, there have been all kinds of debates, comments and insinuations on what his stand would be. It surely did not need much of a prophet to understand the sum and substance of this encyclical because Pope Francis repeatedly hinted through words and actions of what the contents would be. Together with the ecumenical patriarch Bartholomew I in May 2014, Pope Francis co-signed a common declaration repenting for humanity’s treatment of the earth. He has been consistent in his defense of farmers who are poor and owned small land holdings.

In his first Apostolic Exhortation ‘Evangelii Gaudium’ he had already asserted that ‘there are other weak and defenceless beings who are frequently at the mercy of economic interests or indiscriminate exploitation. I am speaking of creation as a whole.  We human beings are not only the beneficiaries but also the stewards of other creatures. Thanks to our bodies, God has joined us so closely to the world around us that we can feel the desertification of the soil almost as a physical ailment, and the extinction of a species as a painful disfigurement. Let us not leave in our wake a swath of destruction and death which will affect our own lives and those of future generations’. (#215)

Above all, the Pope has never minced words in taking on capitalism, the greed and selfishness of a few and the fact that the rich and the powerful contribute significantly to the destruction of our planet. On the eve of the encyclical’s release, Pope Francis very emphatically told a group of pilgrims that they need to receive his encyclical with open hearts. “Our house is being ruined and that hurts everyone especially the poorest among us. My appeal is, therefore, to responsibility, based on the task that God has given to man in creation: ‘to till and tend’ the ‘garden’ in which humanity has been placed (cf. Ge.2:15). I invite everyone to accept with open hearts this document, which itself in the line of the Church’s social doctrine”.

At the heart of the encyclical are 3Cs – Caring, Challenging and Commitment.

Caring
In ‘Laudato Si’, Pope Francis calls the whole of humanity to be more caring and more sensitive to creation. This, the Pope emphasizes is the duty of every human being in small and big ways. It is therefore significant that in his encyclical he refers to the fact that human beings are stewards of this earth and are entrusted in a very unequivocal way to care for the earth.

Challenges
Pope Francis’ encyclical is all about challenges: the need and importance for a change in lifestyles; to reduce energy consumption, to avert the unprecedented destruction of the environment and very specially to stop using fossil fuels. He challenges the rich and the powerful in a way no one had done earlier; so much so even before the encyclical was released there has already been plenty of heart-burn and resentment from these sections of society. He categorically states, “in the present condition of global society, where injustices abound and growing numbers of people are deprived of basic human rights and considered expendable, the principle of the common good immediately becomes, logically and inevitably, a summons to solidarity and a preferential option for the poorest of our brothers and sisters. This option entails recognizing the implications of the universal destination of the world’s goods, but, as I mentioned in the Apostolic Exhortation ‘Evangelii Gaudium’, (123) it demands before all else an appreciation of the immense dignity of the poor in the light of our deepest convictions as believers.  We need only look around us to see that, today, this option is in fact an ethical imperative essential for effectively attaining the common good” (#158)

Commitment
A radical and positive change to what is happening to the earth will not be possible if there is no whole-hearted commitment from every level of society. The Pope does not spare the priests of the Catholic Church and he calls upon them to engage with the faithful on environmental issues. He calls for a new global political authority which needs to shoulder the responsibility ‘of tackling the reduction of pollution and the development of poor countries and regions’.

The encyclical is direct and hard-hitting. In the very second para, he writes, “this sister now cries out to us because of the harm we have inflicted on her by our irresponsible use and abuse of the goods with which God has endowed her.  We have come to see ourselves as her lords and masters, entitled to plunder her at will.  The violence present in our hearts, wounded by sin, is also reflected in the systems of sickness evident in the soil, in the water, in the air and in all forms of life. This is why the earth herself, burdened and laid waste, is among the most abandoned and maltreated of our poor; she “groans in travail” (#2). It is timely and it was surely well worth the wait. Now that we have the blue-print to address several ills which are plaguing the world, the one question we need to ask ourselves is whether we individually and collectively have the courage to put the Pope’s vision into action. He questions, “What kind of world do we want to leave to those who come after us, to children who are now growing up?” (#160)

(* Fr. Cedric Prakash SJ is the Director of PRASHANT, the Ahmedabad-based Jesuit Centre for Human Rights, Justice and Peace.)