We need to learn to laugh at OURSELVES...and to LEARN from OUR MISTAKES!!! 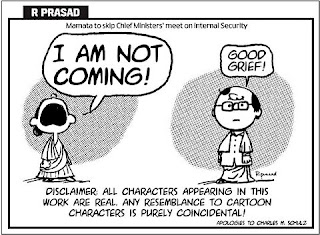 If India's parliamentarians, who were recently incensed by a 63-year-old cartoon, decide it is time to eradicate any political cartoons that might offend, where should they start? India Ink has put together a short compilation of potential targets, compiled for cartoon lovers and outraged politicians both.

While cartoons that appear in textbooks have loomed large in the news, it is newspapers, of course, which have spawned thousands of distorted caricatures and wickedly satirical cartoons. 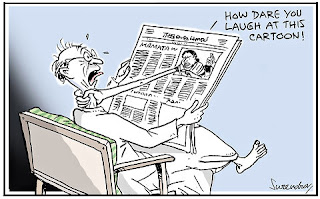 Courtesy of Surendra/The HinduA cartoon by Surendra that appeared in The Hindu on April 14, 2012, caricaturing Mamata Banerjee after her government arrested a professor.

The Times of India carries "Ninan's World" by cartoonist Ajit Ninan, who earlier produced the "Just Like That" cartoon series along with Jug Suraiya, published bi-weekly in the Times of India. 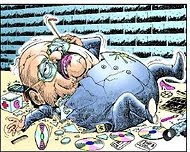 Mr. Ninan, incidentally, sides with the politicians on the Ambedkar-Nehru cartoon issue. "The cartoon drawn by Shankar was perfectly valid, for its time, but a cartoon has absolutely no business in textbooks," Mr. Ninan told India Ink.  "I do not blame the government or the protesters for what is happening, it is the babudom that is responsible. Somebody in the NCERT made mischief by putting the cartoon in a textbook."

The Times of India also hosts a gallery of pioneering cartoonist R.K. Laxman's work on its Web site. Mr. Laxman is a Ramon Magsaysay Award winner who created the hugely popular character "The Common Man." 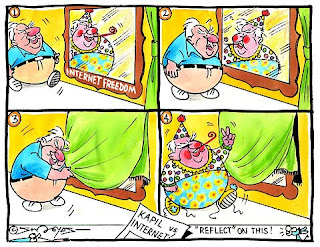 The Hindustan Times has its very own blog "Dabs and Jabs," where cartoonist Shreyas Navare jabs his pen into some political balloons. Mr. Navare firmly steered India Ink away from a conversation on the politics of cartoons when contacted by phone this week.  "I make my political comments through my cartoons," he said.

"By trying to keep students away from cartoons they are being denied the fullest scope of what democracy offers through a unique art form," said Mr. Navare, when asked about the recent controversy surrounding a six-decade old cartoon of India's constitutional authors, B.R. Ambedkar and Jawaharlal Nehru. 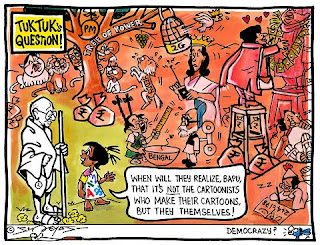 Cartoonist Surendra adds color to the pages of the otherwise politically conservative daily  The Hindu.  "The Nehru-Ambedkar  cartoon controversy is good and at the same time bad. This particular cartoon may have been all right 60 years ago, but is definitely offending to [a] large section of people. The people who chose to put it in textbooks did it for wrong reasons." Mr. Surendra said.

Courtesy of Surendra/The HinduA cartoon by Surendra in The Hindu, published on May 12, 2012, based on an earlier cartoon by Shankar depicting Jawaharlal Nehru and B. R. Ambedkar.

Outside the newspapers, there are dozens of private blogs, carrying the published works of India's famous cartoonists  and of amateur artists. There's everything from Cartoon India, which claims to be the "first daily updated cartoon Web site"  to Cartoon Watch India the "only monthly magazine" dedicated to cartoons.

Then there is the Indian Institute of Cartoonists, which the Web site claims is the first of its kind in India, and the Kerala Cartoon Academy based in Kochi. 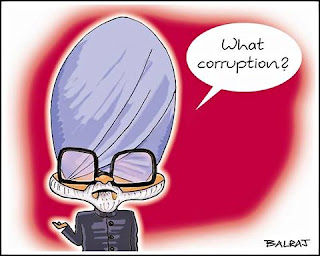 The Kerala school has been proactively taunting politicians — it launched an online exhibition of cartoons about West Bengal Chief Minister Mamata Banerjee, after she had Prof. Ambikesh Mahapatra arrested for allegedly circulating a cartoon of Ms. Banerjee. Recently it organized another online exhibition to honor Kesava Shankara Pillai, better known as Shankar, who penned the Ambekar Nehru cartoon at the center of the recent controversy.