A UNIQUE CHRISTMAS CRIB IN THE CONTEXT OF AHMEDABAD'S 600 YEARS! 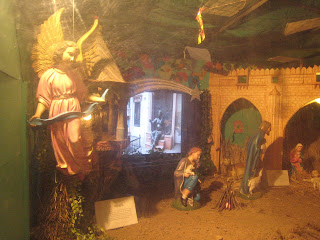 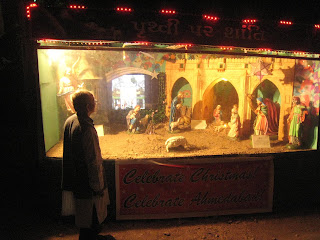 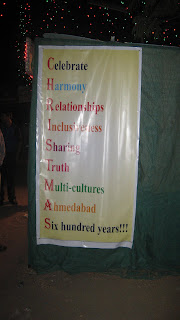 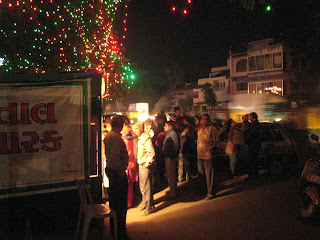 IN THE CONTEXT OF

In a unique and creative way, PRASHANT, the Ahmedabad-based Jesuit Centre for Human Rights, Justice and Peace  tried to communicate the Christmas message celebrating 600 years of Ahmedabad.

When Jesus was born 2000 years ago in a little town of Bethlehem (Israel), the message that he brought to the whole of mankind was 'peace on earth and goodwill to all'.  This message celebrated the diversity of his time, a profound respect for all and that every human being has a right to enjoy the gifts of peace, justice, joy, hope and freedom.

Ahmedabad was founded 600 years ago by Ahmed Shah in an environment which was permeated with similar values of tolerance, harmony, peace, goodwill and diversity.  These values have largely stood the test of time inspite of efforts being made by certain sections of society to incite hatred, prejudice, intolerance, violence and divisiveness.

The  huge crib  put up outside the gates of PRASHANT depicted the birth of Jesus in a traditional way but in the context of the rich, cultural and pluralistic traditions of Ahmedabad city.  The crib was in fact outside the THREE GATES (Teen Darwaja) and the angel which brings the good news flies down from an exquisite CHABUTARA (traditional bird feeder). The sky was dotted with little kites depicting the many dimensions of the city and the great festival of UTTARAYAN (the festival of kites) which cuts across all differences and brings people together. A running video show in the background showed various landmarks of the city and how each one of them in a unique way contributes to spreading the basic human values which Christmas brings.

This unique creation celebrating the birth of Jesus and 600 years of Ahmedabad was the joint effort of many including well-known sculptor Karl Antao, interior designer Daniel Reubens, creative designer Lazarus Lopez, artist Fr. Aubrey Fernandes and the Gurjarvani Communications Team.

Thousands of people,of different faiths and from all strata of society came to "see" the crib during the Christmas week..Many prayed devoutly before the Child Jesus.Some boldly exclaimed that" finally  we understand the real meaning of Christmas"Wide coverage was given to the crib by the local media-both vernacular and English.The one lament heard after it was dismantled on January 3rd was "that it should have been kept for some more days!"